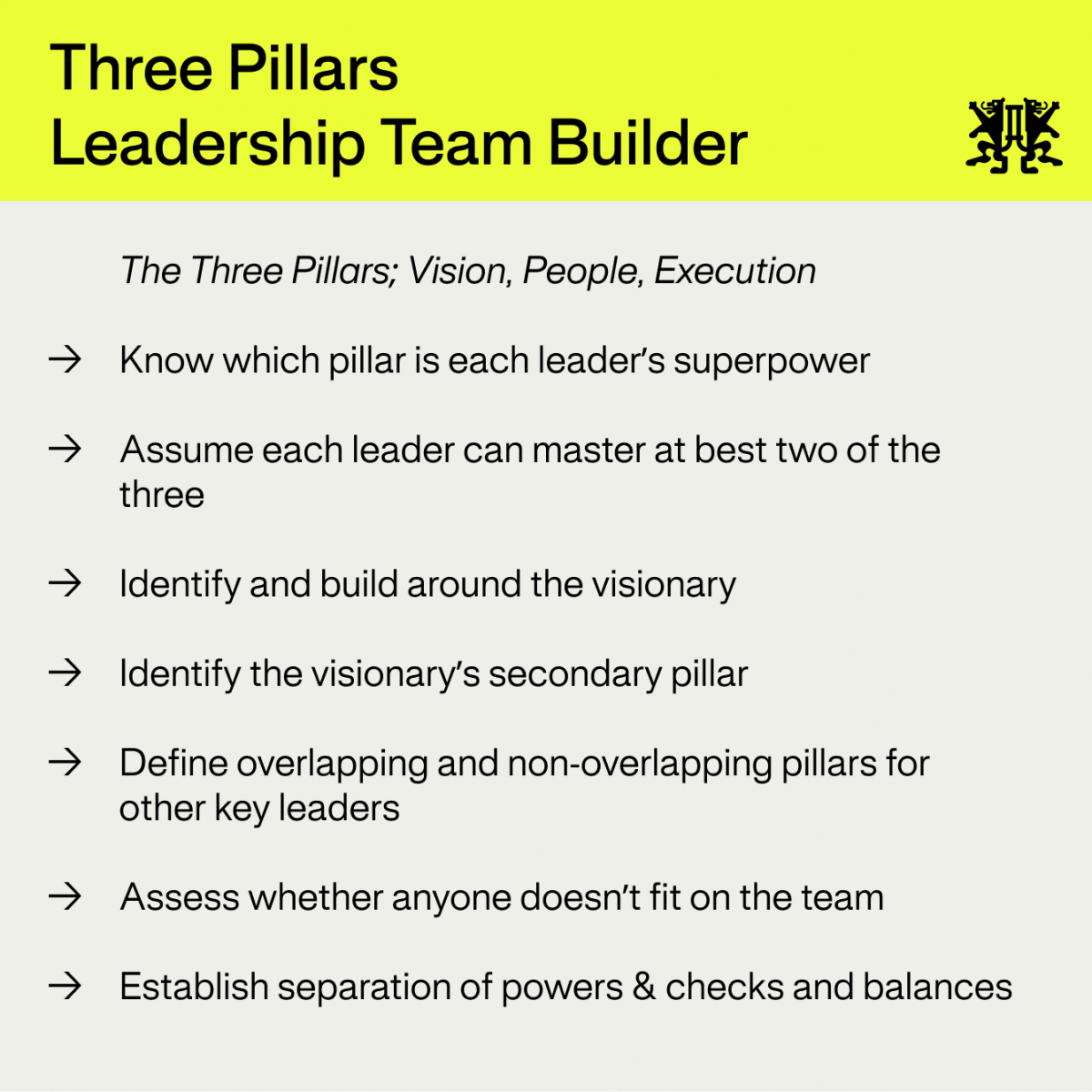 Leadership teams are built on three pillars: vision, people, and execution. The team needs to be strong in all three and this is achieved by thoughtfully designing for overlapping and non-overlapping strengths.

Know where you are truly exceptional

Each leader should focus on which of the three pillars will be their strongest. It’s always great to work on your weaknesses, but the most important part of fitting in on an exceptional leadership team is understanding, embracing, and leveraging your superpower.

Assume you can master at best two of the three

Be candid among the team about who is best at what, and where people should be focused. Be self-aware about where you’re weakest, and strive to ‘do no harm’ there. It’s really awesome when the leadership team has folks with somewhat overlapping superpowers. For example a CEO with strong vision and execution capabilities that overlaps with a really strong people manager that also has solid execution capabilities. This way they can overlap on execution and the people management focused leader can offset that area where the CEO is weaker.

Identify and build around the visionary

Without direction, execution and management firepower doesn’t matter. The most important role to identify is the team’s Visionary. Everyone needs to understand this and how it sets Direction.  Defining and keeping the vision does not mean that you control every single decision, but it does mean that the entire leadership team needs to be taking input from the Visionary as equally important to other critical matters like the team and the execution roadmap. More on this in separation of powers section below

Ideally, the CEO is a visionary leader — this is the easiest setup for success, the so-called “Product CEO.” Many of the best CEOs combine vision and execution, and have other leads whose strengths are with people. Visionaries can be non-CEO and focused on Execution and People paired with a Visionary peer; a founder or executive chairman could be the visionary product leader, or or driving the scientific vision at a biotech or deep tech.

Some overlap is required for communication. E.g two execution focused leaders may get the rest of the team onboard for how something needs to be managed despite pushback from the team. The visionary leader who is weaker with people management might be able to overlap on execution with a strong people manager who is great at getting the team excited about the vision through emotional engagement.

Assess whether anyone doesn’t fit on the team

Beware of excessive redundancy leading to too many cooks in the kitchen. Too much vision leads to infighting about direction. Too much execution focus will lead to a lack of empathy for the team and burnout. Too much people management will lead to a ‘feel good’ culture that optimizes for short term team happiness over long term success. Beware of leaders that overestimate their core competency; you need actual superpower-level performance at each core pillar, not ‘pretty good.’ Beware of leaders that aren’t self-aware and feel they are strong in areas where they are weaker – this leads to overstepping boundaries and causing strife.

Establish separation of powers and checks and balances

The three pillars should be thought of in terms similar to the separation of powers in the US Government: Vision is the executive branch, Execution is the legislative branch, and People is the judicial branch. The Vision sets the direction, the Execution sets the roadmap, and the People interpret the roadmap alongside the impact on the team.

Background on the three pillars

I first heard about this framework from some executive teams back in 2012, and I’ve applied it ever since. My guess is that it originally came from coaching that execs were getting from Julie Straw, and is outlined in her book published in 2013.

Vision is “what the world will look like” and mission is “why it’s meaningful.”

For example, Microsoft’s founding vision was, “a computer on every desk and in every home,” and Tesla’s mission is, “to accelerate the world’s transition to sustainable energy.”

Actual vision is probably the rarest leadership skill, and it comes with a cost — people with real vision are drawn deep into concentrated thought, are often agitated when interrupted, and may have a difficult time translating the vision to execution. Because of this, there are very few people who can both see a real vision of the future and be good enough in planning execution and working with people that they can bring that vision to life. Many with vision aren’t organizational leaders that make the vision a reality, but instead are more thought leaders, writers, and other various forms of influencers.

Visionary leaders need to be able to synthesize vision and mission to define paths of execution and motivate teams along those paths. They need to help teams visualize the future that the team is creating together and internalize the impact it will have if this future is brought into existence. Teams need to visualize what the world will look like and internalize why it’s a meaningful journey to get there.

Vision without team and execution is hallucination

Emotional attunement with an entire team is a challenge, especially as teams scale up and there are many layers of management. Expert people managers are able to avoid burning out the team by pushing death marches too hard, and also prevent allowing the team to drag things out and move slowly when they could be going a lot faster. They know how to harness the team’s energy and rally people to do their best work. The old “one plus one equals three” adage. It’s really about managers that are able to get more out of their teams than the sum of the parts.  they can sense attrition from a mile away and help to retain top people or help to gracefully transition folks out who may be struggling.

Driving alignment up and down in organization is super challenging. To make matters worse, sometimes the Visionary leader who has the best sense of the vision mission and direction is not as good at people management and ensuring that everybody up and down the organization fully understands the vision and the mission and the plan to carry it out.  On top of that the alignment against the direction that the company is headed in overall has to itself align with the direction for individual teams and for individual contributors. At the level of the individual contributor, the manager needs to care about the professional hierarchy of needs for each individual and how to align their personal work and growth plans with what matters to make the company win overall.

Managing your way out of bad execution

Great executors are laser focused on outcomes and mechanically precise in their pursuit of goals. They’re notorious for meticulous milestoning, roadmapping, and project management, sometimes to the point that it becomes an annoyance that everyone knowingly appreciates but also dreads. They are the taskmaster and constant voice of accountability to measurable results.

No matter how strong the vision and the team are at the end of the day, managing execution is still really difficult, time consuming, and requires a lot of hard skills. A lot of teams try to scale headcount in order to increase velocity or output, and it often doesn’t work. You easily end up with sublinear scalability, where you get only a fraction of each new team member’s potential productivity. This is why it’s often more important to have outstanding execution managers that are fixing systems in place for doing the work instead of just adding more people to the problem. Great people managers will be great at sussing out why the team is unhappy, but unless they’re also outstanding execution managers they may not take all the right actions to get things on track.

Execution managers are focused on goals and tracking an organizing work to be able to meet the goals. They are constantly working on how to make hypotheses explicit. That means let’s say we want to grow our customer base by 3 fold in the next 6 months, and we think that running email campaigns for the sales team to generate more leads it’s going to be key to that outcome. The great execution manager sees the email campaigns as a hypothesis, and ruthlessly tracks them week-over-week to see how the conversion numbers look and whether this is really a path to increasing the customer base 3 fold or we need to start testing other ideas.

Hammer looking for a nail: Executing your way into a vision

Executing with a blindfold; failing to make hypotheses explicit and pivot as needed