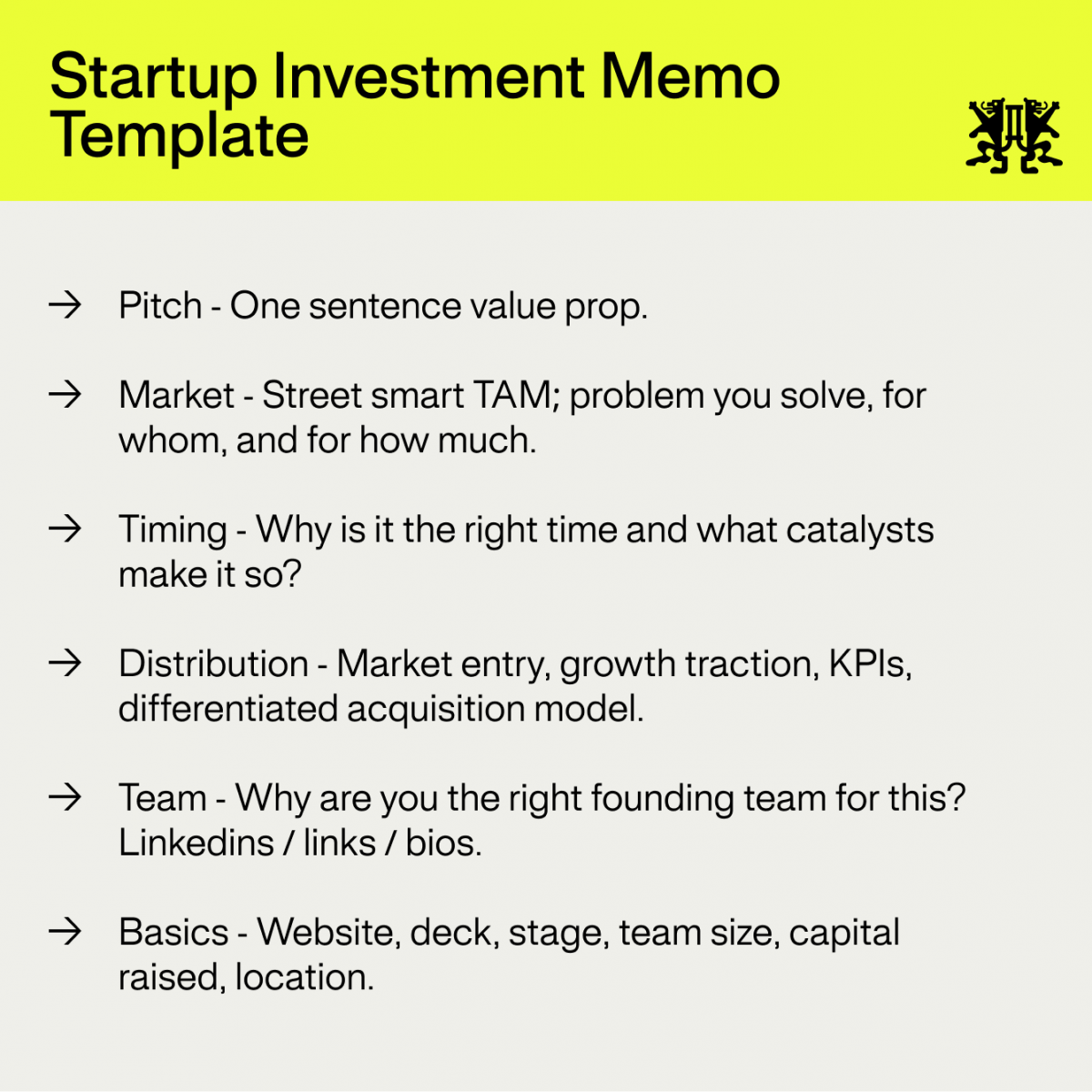 A well written memo is the core of sharpening your startup pitch.  You should write the memo first, and build the deck only once you have a final draft.

It’s important to keep early-stage startup pitch decks very short, and this 6 section memo can be turned into a 6 slide pitch deck mapped to each section.  It’s okay to have more detailed supporting materials that you feel are relevant, but those should be moved into an appendix.

The good news is the startup community has mostly converged on a set of categories that can serve as your one-pager template.

Clone this doc to get started. This memo is composed of six sections, which you need to fill out constrained to a total of one page. My view is that constraining to one page is critical, as it forces clarity and prioritization of what’s truly most important. Sections listed below.

Market: Street smart TAM — problem you solve, for whom, and for how much.

Timing: Why is it the right time and what catalysts make it so?

Team: Why are you the right founding team for this? Linkedins / links / bios.

The future of fundraising is more distributed, streamlined, objective, and systemic. Examples of what’s coming include YC and other accelerators, NFX FAST, AngelList syndicates, and DAOs.

If you look at the memos that appear on YC, AngelList,  and NFX fast for example, they are virtually the same.  I think in the future there will be many places to submit a standard one-pager investment memo for systematic decisioning. There will be an industry-standard template like the one I’m proposing here, similar to how YC drove adoption of the Safe Note. This doesn’t mean investment decisions will be fully automated but rather that the process to progress to an in person pitch will be very streamlined at the early stages.

This isn’t a very big change from today.  Most top firms have partners write up an investment memo for the investment committee; both for decision-making and governance.

As an entrepreneur I find this process of creating a one-pager to be incredibly powerful as a focusing tool.  When you start with the pitch deck, there’s a tendency to generate all kinds of materials that go deep into the weeds and distract from the core of the business. This just makes it way less likely that you will maintain investor attention during pitch meetings.

More detailed materials should be developed only after the final draft one pager, and should be built out as slides in appendix to the core six-slide deck based around categories in the one-pager. Founders can jump in and out of the appendix as needed throughout the pitch and during diligence. If the same questions keep coming up from investors at a level of detail that doesn’t make sense in the core pitch, just create slides in the appendix that address those questions.

The oldest and most well known template is probably the YC application. The YC application has been around for nearly 20 years, so many blogs have dissected the template and made it available as a google doc. This is worth looking at whether you apply to YC or not. Here’s the original Dropbox application as an example.

YC has also published a memo template and Parker Conrad has shared how Rippling raised a 45M Series A using only a memo, without any deck. The YC memo is part of its Series A guide which also includes a deck outline as part of the set of investment materials.

NFX has put a great deal of work into their FAST program. You can fill out a template of 12 questions and submit for pre-seed or seed investment within 9 days.

AngelList investors submit memos to their syndicates for investment consideration. You can review the AngelList memo template but keep in mind that investors don’t follow this religiously on AngelList, folks tend to clone it and do their own thing. Here’s a summary of other info syndicate investors see with a deal alongside the memo, which gives you a sense of what they care about when making investment decisions.

Bessemer has put up a list of well-written memos that show you the level of work VCs will often put in and surface to the partnership ahead of investment committee meetings. Fred Wilson also puts up USV investment memos – love the memos for twitter and coinbase.

Visible wrote a solid post summarizing memos and linking out to many good resources. They mention that Andy Johns at Unusual Ventures even recommends executives create strategy memos for the CEO that look a lot like investment memos that the CEO would create for investors. I haven’t tried this yet myself but love the idea.

Lastly, it’s also worth reading a little about how Signalfire operates to try and make more systematic investment decisions, as I suspect that the industry will head towards more programmatic assessment of standardized investment memos over time.

Send me memos for review